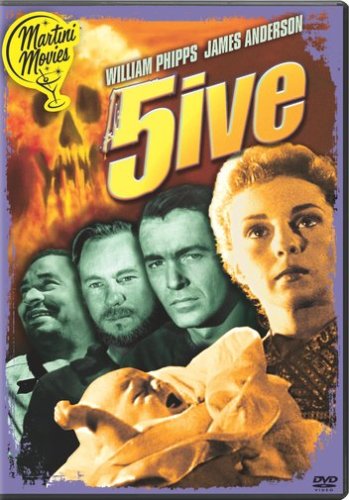 Brand : Sony
from USA
to GB
in 5-8 days
At your doorstep by Jul 31  to Aug 03 with standard delivery

Sony Pictures’ "Martini Movies" series, of which Five is one, consists of films clearly intended to be laughed at, not with; indeed, watching this 1951 turkey is like a Mystery Science Theater screening, except that you supply your own commentary. But give writer-director Arch Oboler credit for coming up with one of the earliest entries in the post-nuclear apocalypse genre. In this "story about the day after tomorrow," the titular five have survived the radioactive fallout that has effectively wiped out the rest of humanity and somehow ended up in the same place (Malibu, California; the shooting took place at Oboler’s home, which was designed by Frank Lloyd Wright). The five quickly become four, as an elderly banker succumbs to radiation sickness. That leaves a pregnant woman (Susan Douglas), a "philosopher" (William Phipps), an "explorer" (James Anderson), and a guy who was accompanying the banker; and since the latter is African-American and this is the early '50s, that means it’s up to the other two men, one a practical hard worker and the other a nonchalant layabout, to battle it out to see who’ll become Adam to the woman’s Eve. Not a whole lot happens in this "cheap honky-tonk of a world"--tensions mount; grass grows; they dance to a Strauss waltz--but there’s plenty of philosophizing about the new order and some reminiscing about the old one, most of it ludicrously melodramatic and pseudo-profound. Clearly this stuff is best apprehended with the help of a cocktail or two, and we are helpfully provided with two martini recipes to guide us through. Cheers! --Sam Graham Stills from Five (Click for larger image)
Show More
Reviews

Disclaimer: The price shown above includes all applicable taxes and fees. The information provided above is for reference purposes only. Products may go out of stock and delivery estimates may change at any time. Desertcart does not validate any claims made in the product descriptions above. For additional information, please contact the manufacturer or desertcart customer service. While desertcart makes reasonable efforts to only show products available in your country, some items may be cancelled if they are prohibited for import in Great Britain. For more details, please visit our Support Page.